You are here: Home / Our Services
1. Sclerotherapy
Sclerotherapy is a form of treatment for both spider veins and average-sized varicose veins. This treatment uses a chemical injected into the troublesome veins to cause the blood to coagulate, inflamation to set in, and the vein to eventually collapse so that the blood supply is rerouted to healthier veins. One variation of sclerotherapy, foam sclerotherapy, suspends the chemical in foam to provide greater adhesion to the vein walls.

Depending on the number of veins to be treated, a sclerotherapy session usually takes less than 30 minutes. After the procedure, the treatment site is wrapped in a bandage which applies pressure to control any bleeding and promote healing. Once treated with sclerotherapy, varicose veins do not come back.

Sclerotherapy is done on an outpatient basis and is only mildly painful. Other than the sting of the injection, some patients report some light cramping during the injection of the solution, but this quickly passes. Although all procedures have some risks, sclerotherapy has very few. Light bruising sometimes occurs around the affected area, and some patients have reported that freckling developed temporarily in the treatment area, but these both usually disappear within weeks.

With sclerotherapy, some patients may require several injection sessions for optimal results, but these are scheduled about a month apart. After finishing the treatment, the pain and unsightly appearance of the damaged veins are greatly improved. Patients report significantly smoother skin and little discoloration. Because these results are achieved without hospitalization or general anesthesia, sclerotherapy is a better choice than surgery for many patients. Patients also find recovery time is much shorter with sclerotherapy, and they are usually able to return to work within days.

2. Compression Stocking
Compression stockings are used to support the muscles of the calf in circulating blood and lymph fluid through the legs. These stockings or hose are usually made of elastic or rubber fibers that aid in compressing the leg.

3. Foam Sclerotherapy
Foam Sclerotherapy is a safe and effective method for treating troublesome varicose veins through injecting a detergent-like agent which has been suspended in foam into the vein. This method is so effective because the foam fills the entire cavity of the vein. This treatment is performed on an outpatient basis by either a physician or a cosmetic technician who has been trained in the procedure.

Though it is less expensive than other more invasive treatments, costs for foam sclerotherapy still range from $200 to $500 in most areas. One treatment often resolves the issue, but sometimes as many as six treatments are needed. These can be scheduled about every two months until the desired results are achieved.

Foam sclerotherapy has few side effects, but compression hose should be worn for a while, and it sometimes takes up to six weeks for the veins to disappear completely. The injection site may be slightly sore and some bruising may occur, but the veins will no longer cause pain. Once they are gone, they will not return.

Calling a local provider of foam sclerotherapy to get all of the facts about this new treatment for varicose veins takes only a few minutes, and could be a relieving solution to venous problems.

4. Ultrasound Guided Sclerotherapy
At one time, surgery and laser treatments were the only options for those wishing to get rid of enlarged varicose veins. Modern technology now provides a third choice called ultrasound guided sclerotherapy. This procedure is performed by a doctor or trained cosmetician who uses an ultrasound machine to pinpoint problem veins. While looking at the vein on a monitor, the provider can then guide a solution filled needle into the vein. This fluid disturbs the lining of the vein, causing the vein to contract and close.

Ultrasound guided sclerotherapy, performed using a local anesthesia, can be performed in a short time period, but it may require several sessions to get results that are satisfactory. These sessions range in cost from roughly $300-$500, but the results are permanent.

One of the benefits of ultrasound guided sclerotherapy is the short recovery period. Although they may have to limit exercise and wear compression hosiery for several days after the surgery, most patients can return to their normal activities very quickly.

A quick call to a provider of ultrasound guided sclerotherapy will enable you to schedule a consultation, during which a specialist can answer your questions and help you decide whether this procedure is the right one for you.

5. Venous Reflux Exams
A venous reflux exam is a non-invasive test used to evaluate the valves inside the veins of the legs. If a patient requires a venous reflux exam because of vascular problems, both legs should be evaluated. The test is designed to identify problems inside leg veins and arteries, caused by damage inside the blood vessel, which can cause problems with the direction of blood flow, and the velocity of the blood flow in the leg. Identifying the cause of these problems is important to prevent damage caused by poor circulation.

During the test, a small sensor is attached to the leg that monitors blood flow. The patient then pumps their foot up and down several times to help the blood to flow through the leg. The sensor measures the speed that the blood flows through the leg, and from these measurements the doctor can determine if the valves are working correctly, or if there is a problem with circulation. Some tests involve placing blood pressure cuffs along the leg and monitoring the blood flow patterns by ultrasound.

6. Endovenous Laser Ablation
Women and men looking for an effective treatment for varicose veins that does not include surgery or scarring may want to consider Endovenous laser ablation, an advanced vein therapy that is highly effective in most cases. Endovenous laser ablation is virtually pain free and can be performed in less than an hour and without hospitalization. In this minimally invasive procedure, laser energy is used to seal faulty veins, which results in a reduction or complete closure of the vein.

A trained professional administers Endovenous laser ablation to patients in a doctor office setting as an outpatient procedure. Ultrasound imaging is used to map the veins of the legs, as well as to direct the insertion and placement of a laser fiber that is used to deliver the laser energy to targeted veins. Once the provider identifies the faulty veins, a local anesthetic will be administered to ensure patient comfort prior to beginning the procedure. This treatment most often is performed in under an hour and recipients can return to regular activities, except strenuous exercise, right after the procedure. Compression stockings should be worn for one week to ensure proper healing and a follow up visit will be scheduled approximately one week after the initial treatment.

Geographical location, practitioner fees and the number of veins to be treated influence the cost of receiving Endovenous laser ablation. If the Endovenous laser ablation procedure is considered medically necessary in order to alleviate the pain that is often associated with varicose veins, this treatment will likely be covered by medical insurance.

Contacting a vein specialist in your area is the best way to learn more about Endovenous laser ablation and to determine if this is the best option for you.

7. Varicose Vein Surgery
Large, bulging veins close to the skin's surface are often found in the lower legs and feet and are called varicose. Because we walk, stand and run on our feet, veins in our lower legs and feet receive quite a bit of blood pressure.

Varicose veins can be more than a cosmetic concern since they impede blood flow and hinder the return of oxygen-depleted blood from the lower legs and back to the heart and lungs. The usual cause for this is damaged valves within the veins that allow backward blood flow and pooling of blood resulting in enlarged veins. Untreated veins can lead to serious medical conditions with associated pain, inflammation and discoloration.

Ambulatory phlebectomy—small incisions or needle punctures are used to extract the problematic veins with a phlebectomy hook. A hook is inserted into a micro-incision in the leg. A section of the vein is hooked and then removed through the incision. With this procedure, a compression bandage is worn for two weeks. This minimizes swelling and discomfort and allows for proper healing.

8. Varicose Veins
Varicose veins develop when superficial veins distend with blood that leaks from deeper lying veins, where it belongs. This is called reflux and it is due to gravitational force on veins with valve incompetence. Normally valves prevent pooling of blood in the lower extremities during the period between heart beats when the ventricles, or pumping chambers of the heart, are refilling. At these moments blood is not being circulated through the body under the systolic blood pressure generated by contraction of the heart. During this period of no forward flow, blood in the venous system is subject only to gravitational pressure and in incompetent veins blood falls down toward the feet and outward into veins closer to the skin. Veins in the subcutaneous layer of fat and outside the muscle compartment of the legs have little support and as an increased blood volume flows into them, they balloon up and begin to function more like reservoirs than conduits.

This problem is almost always one of genetic predisposition. In other words, most people "inherit" their varicose veins. They appear first usually after puberty and particularly under the unique stresses imposed by pregnancy.

The most obvious characteristic of varicose veins, other than their larger size and what distinguishes them from spider veins, is their commonly colorless bulging through the skin. The usual symptoms of aching and heaviness are due to too much blood under too much pressure. All such veins are abnormal and their elimination with treatment improves the general circulation by assuring that blood flows only in normal, healthy deeper lying veins.

Rather, for even the most severe cases of varicose veins, one or more minimally invasive brief procedures can be carried out under local anesthesia, after which patients may drive home and return to work and usual activities right away. No incisions are required and therefore there are no scars anywhere on the legs. For patients who are not local and cannot return conveniently in a week or two, comprehensive treatment is provided at one visit. A follow-up appointment between six weeks and 6 months is, however, considered necessary.

Cosmetic results are superior to ligation and stripping surgery because clearing of varicose veins is more complete than can possibly be accomplished with surgical stripping alone and because treatment does not leave scars. Long term results are proving to be the best so far attainable because the mechanism by which varicose veins are most likely to form will have been, in most cases, permanently alleviated. And finally, there is no substitute for being able to return to work right away.

9. AMBULATORY PHLEBECTOMY (MICRO PHLEBECTOMY)
Ambulatory phlebectomy is essentially a scaled down, minimally invasive, office based version of the old gold standard treatment, vein stripping. After numbing the skin and leg with local anesthetic, tiny incisions are made in the skin at several locations, and a surgical hook is used to physically hook and pull out varicose veins, which are then completely removed from the body. This is a very effective and safe technique for treating large varicose veins that are either very twisted and thus not appropriate for EVLA (the laser fiber cannot negotiate extreme bends in veins), or as a second procedure when EVLA is performed to treat the root cause diseased deeper veins but large varicose veins remain downstream. Phlebectomy can be used as a stand-alone procedure or as a procedure following EVLA or sclerotherapy. The same compression stockings and close follow up regime is used as after the other procedures. 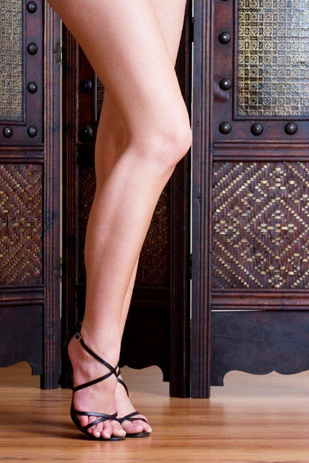